AND THE SELFRIDGE MILITARY AIR MUSEUM

About Selfridge Air National Guard Base

It was 1917, and the United States had recently entered World War I. Part of the war effort saw the establishment of an airfield in the swampy lowlands between the eastern city limits of Mount Clemens, Michigan, and Lake St. Clair. Military aircraft piloted by members of the 8th and 9th Aero Squadrons were first seen aloft over the city on July 9. In more than nine decades of existence, the novelty has not worn off.

Although Selfridge Field has gone through many incarnations, which have brought it from its birth as a fledging army airfield to its current role as an Air National Guard Base, the heartbeat of an institution engaged in making history has never left it.

After training thousands of aerial gunners and hundreds of aircraft mechanics during World War I, Selfridge Field was nearly closed during the post-Armistice drawdown. However, its importance and potential value were evaluated and outright purchase of the installation in 1921 was recommended. The following year opened a new and exciting chapter when the First Pursuit Group, a highly decorated organization that numbered among its members several World War I aerial aces, made Selfridge Field its new headquarters.

The First Pursuit Group would spend the next two decades dazzling the local citizenry, and the world, with their aerial feats. They performed operational testing for dozens of new aircraft, competed boldly in air races, and set record after aviation record. They were the elite of the aviation world, a fact that is reflected in the number of famous names recorded in their squadrons’ rosters. General Curtis LeMay recalled in his memoirs his excitement when, as a young lieutenant with newly minted wings, he received orders for Selfridge Field and an opportunity to rub elbows with the ‘First Team’. General H. H. “Hap” Arnold commented that it was the ambition of every air corps pilot to serve at Selfridge.

Following the war, Selfridge pilots received many opportunities to make history. In 1948, sixteen F-80 jet fighters from the 56th Fighter Group demonstrated for the Soviet Union and the world their ability to deploy quickly across the Atlantic when they completed the first west-to-east transatlantic jet crossing in just over nine hours. When was erupted in Korea, members of this organization were among America’s first jet aces.

In 1955, the Air Defense Command took the initiative to return units to their historic bases, prompting the return of parts of the First Pursuit Group, now designated the First Fighter Wing, to Selfridge Field. The First Fighter Wing remained at Selfridge for another 15 years, though the base was already entering another phase of its history, which would culminate in the transfer in 1971 from the U.S. Air Force to the Michigan Air National Guard. Under the Michigan Air National Guard, Selfridge served as the host organization, serving as a model of a successful joint-services installation with units from all five branches of the armed forces represented within its gates. (Courtesy of book, Images of Aviation: Selfridge Field).

Selfridge Field was named in memory of Thomas Etholen Selfridge (1883-1908) in San Francisco, a graduate from the United States Military Academy at West Point with the class of 1903. Lt. Selfridge was 31st in his class of 96, ranking well below the valedictorian, Douglas MacArthur (1880-1964). After receiving his commission, Selfridge was assigned to the field artillery and then was attached to the U.S. Army Signal Corps, where he had an opportunity to explore the potentials of military aviation and joined Dr. Alexander Graham Bell in his experiments with kites with great lifting capacity. He also became involved in designing and building early aircraft. On September 17, 1908, while conducting trials of the Wright airplane he went aloft with Orville Wright. On that day, flying about 150 feet from the ground over Fort Meyer, Virginia, Wright put the plane into a steep turn. The wing flexed propeller blade snapped off and the plane, out of control, crashed. Lt. Selfridge died that afternoon, the first man killed in a heavier-than-air flying machine. Orville Wright was hospitalized for several weeks. 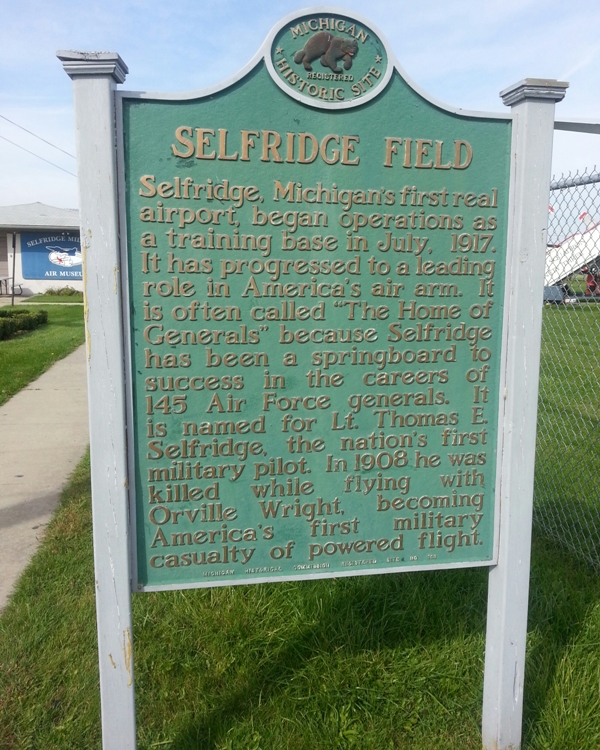 About MAGHA and the Selfridge Military Air Museum

Educating and inspiring generations with over one hundred years of aviation experience and innovation.

Since its beginning and for more than 45 years of operation, the Selfridge Military Air Museum has had only five directors. They are:

Since Bob Stone started the museum, we have had four Executive Directors.  Steve Mrozek, our fifth director, has an enthusiastic interest in military history and an extensive career working with historical museums. Steve Mrozek joined the growing roster of volunteers at the Selfridge Military Air Museum May 2020 and became the Museum’s Curator in July. Steve’s museum career includes positions at the Detroit Historical Museum, the National Baseball Hall of Fame in Cooperstown as well as several local museums. He admits that it’s his interest in military history and past Army National Guard service that led him back to Selfridge. As an avid military historian with several books to his credit, he had served as the historian for the 82nd Airborne Division Association. It was also this interest which led him to the Army and a 26 years long career. As a paratrooper, Mrozek served over ten years in Company F, 425th Infantry, a Long Range Surveillance unit stationed at Selfridge. Later attached to the 82nd Airborne, he deployed to Afghanistan in 2007. In February 2021 he took over the position as Executive Director. 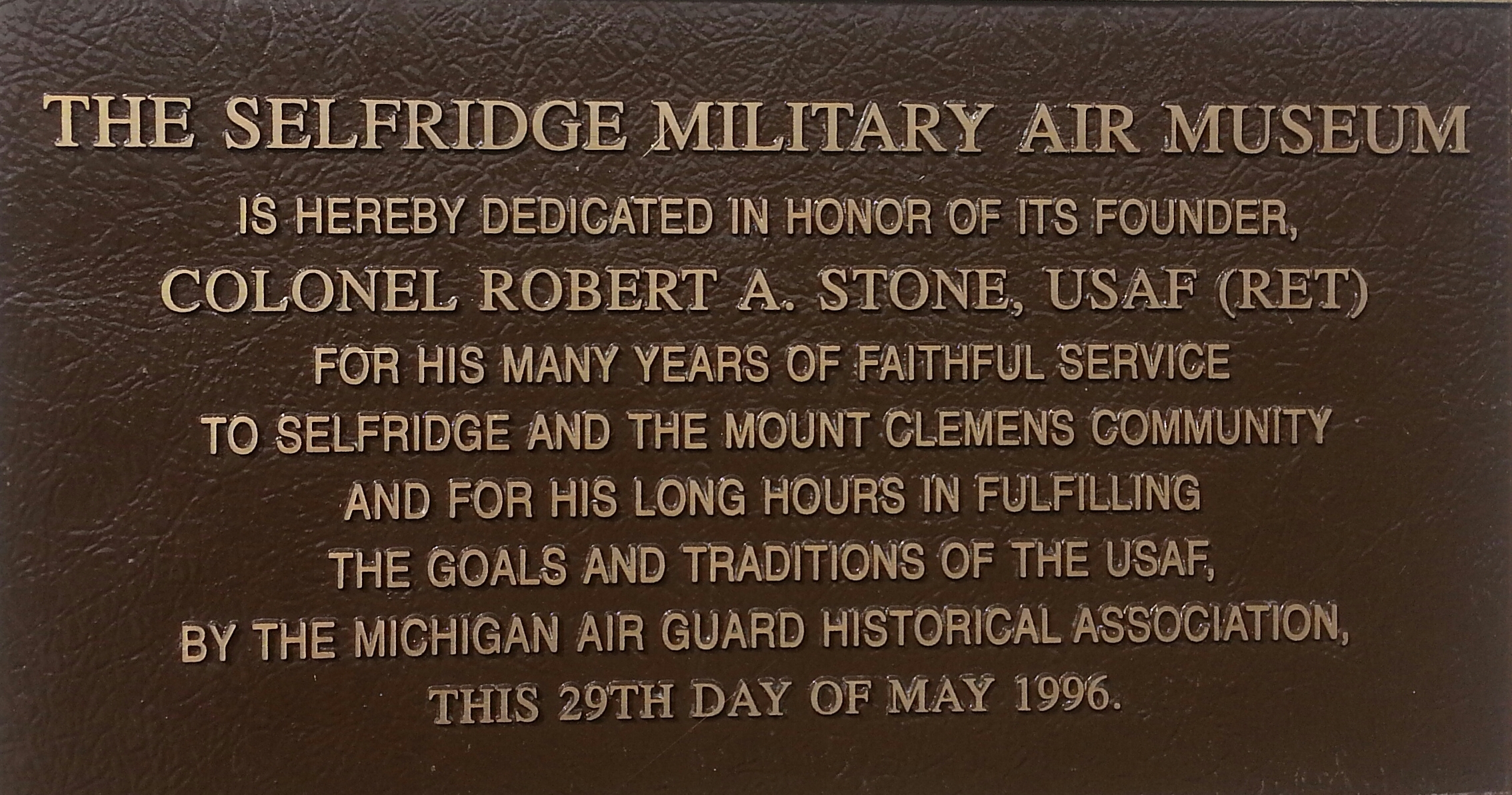 This plaque, dedicating the museum in honor of its founder, Colonel Robert A. Stone, USAF (Ret.) for his years of faithful service is located at the entrance of the museum.